Archbishop: Urkraine holds a unique and pivotal place in the Christian world 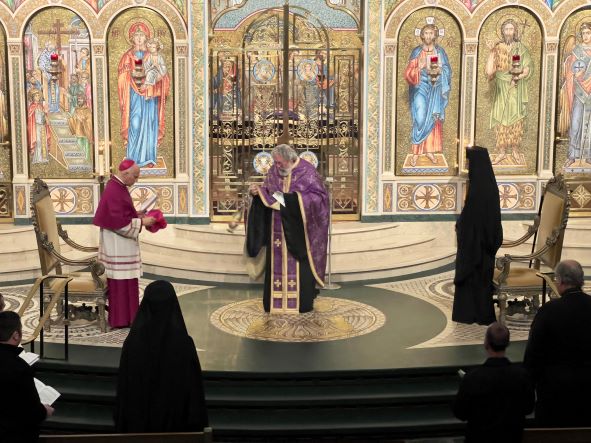 BELMONT _  The annual Ecumenical Service of Salutations to the Holy Cross is frequently a joyous coming together of the Greek Orthodox and Roman Catholic communities of the San Francisco Bay Area. This year, however, it was “tinged with a certain somber tone and sense of urgency, as we are following with horror of the war being waged on our brother and sister Christians in Ukraine,” Archbishop Salvatore J. Cordileone said in his homily at the prayer service hosted by San Francisco Greek Orthodox Metropolitan Gerasimos March 10.

“Perhaps, on the other hand, there could be no more appropriate occasion for us to exalt the Holy Cross, for our brothers and sisters in Ukraine are certainly bearing their cross at this time,” Archbishop Cordileone said.

“And after the manner of the vision of the Emperor Constantine, whom we also honor tonight in our hymns, at the Milvian Bridge, when the Cross appeared to him in the sky announcing to him that he would win with this sign, a luminous cross appeared above the Golden-Domed Monastery of St. Michael in Kiev last week,” Archbishop Cordileone said.

“What a powerful reminder that it is the Cross that is our ladder to heaven, which pulls us out of the violence, chaos and sin of this world into the peace and order of God’s Kingdom.”

Speaking to those gathered at the ornately decorated Greek Orthodox Church of the Holy Cross, where there is a true relic of the Cross, Archbishop Cordileone said: “Truly there is no other way to heaven.  We must pass through the Cross, there is no other way.  Is this not the lesson of Lent?  We fast, we intensify our prayer, we confess our sins to receive God’s absolution in the sacrament, we give alms to the poor and carry out other works of charity, as we keep our vision focused on the goal of this holy season: the Resurrection of our Lord, God and Savior Jesus Christ from the dead, our pledge of eternal life with him.  We must bear this in mind as the news of the loss of life, destruction of property, and threat of obliterating a deep and thriving Christian civilization cannot but fill us with anguish.  With our prayers and material generosity, let us keep the Ukrainian people uppermost in our intentions and come to their aid with spiritual and temporal assistance.”

Separately, earlier in the week, the Archdiocese of San Francisco announced that the annual Catholic Relief Services collection on March 26-27 could be dedicated to relief for Ukraine.

Read more of the Archbishop’s homily.