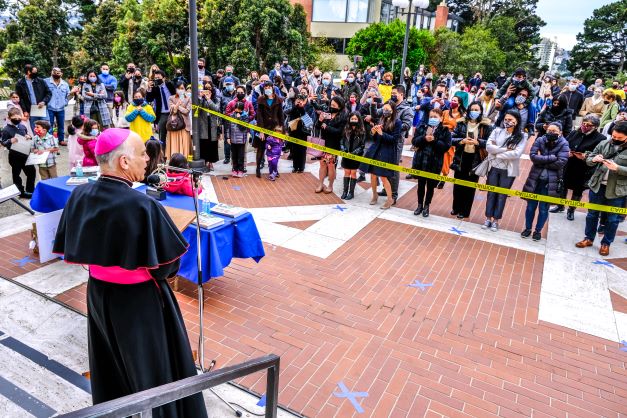 Deadline for entries is January 31

A Respect Life essay awards Mass will be offered by Archbishop Salvatore J. Cordileone at 11 a.m. April 24 at the Cathedral of St. Mary of the Assumption. An awards ceremony for the winners will follow immediately after the Mass.

“I chose Our Lady of Guadalupe because she is the patroness of the unborn. I wanted to concentrate on sharing the great significance the tilma has in God’s plan and its rich history and symbolism,” said Maria Martinez-Mont, Respect Life coordinator.

Our Lady of Guadalupe appeared on an isolated hillside to an Aztec Indian, St. Juan Diego, Dec. 9, 10 and 12, 1531. He was given roses by Our Lady to show to the bishop in Mexico City to convince him to build the church she requested. When St. Juan Diego opened his cactus-fiber cloak, there was a miraculous image of her appearance. That image exists today, 450 years after the appearance of the Blessed Mother and is on display in the Basilica of Our Lady of Guadalupe in Mexico City.

After her appearance, 10 million Aztecs converted to the Catholic faith and ended their practice of human sacrifice. For the mostly unlettered people, the image was immediately understood as an Aztec pictograph that was read and interpreted quickly by the Aztec Indians.

The Respect Life essay contest is open to all students in grades K-12 in public school, private school and home-school. Essays are due Jan. 31, 2022.

This year, parent information packets are in both Spanish and English. The awards are distributed by grade.

More information on the pro-life essay contest can be found at: https://sfarch.org/essay-contest/.