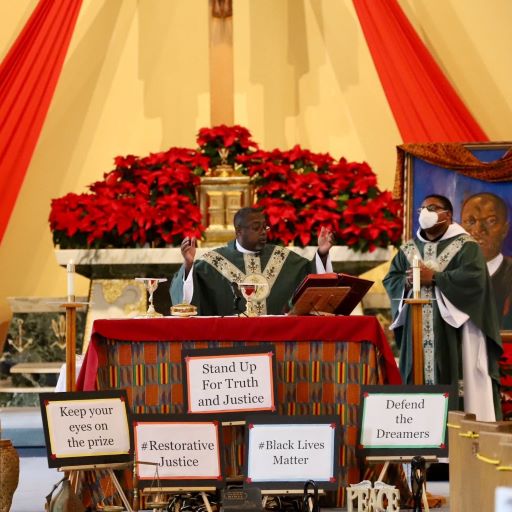 St. Paul of the Shipwreck Parish celebrated the birthday of Dr. Martin Luther King, Jr. with an annual Solidarity Gospel Mass on Jan. 17.

The annual Mass has been celebrated at the parish since 1985, when Paulist Father Jim Goode initiated it one year before the late Dr. King’s birthday was first observed as a federal holiday in 1986.

Paulist Father Bart Landry, in residence at the parish, was homilist for the Mass concelebrated with Augustinian Father Andrew Ibegbulem, administrator. The altar displayed a photo of Reverend King, painted by Father Rey Culaba, CSsR, of Our Lady of Mercy Parish in Daly City.

Dr. King fought against racial inequality, poverty and injustice before he was assassinated on April 4, 1968 in Memphis, Tenn.  One of the five signs surrounding the altar read: “Stand up for truth and justice.”

A highlight of the service was the parish’s presentation of the MLK Jr. Community Service GEM Award to the San Francisco African American Faith-Based Coalition (SFAAFBC). The coalition is a network of 21 churches working together to eliminate health disparities and inequities in communities of people of color in San Francisco.

The pastoral staff, parish council and the Ministers of Christian Service presented the award to the coalition for its dedication in “providing resources to address health, hunger, and homelessness in communities of people of color in San Francisco,” especially noting its work during the COVID-19 pandemic.

The initials of parishioner Gertrude Morris, (GEM), are linked to the award, according to parishioner Loretta Chatmon, to honor heroes and heroines of the Black Catholic community like her.  Morris was the longtime coordinator of parish’s MLK Jr. annual celebration. She worked with Black Catholics nationally and headed up the African American Ethnic Ministries for the Archdiocese of San Francisco.

“No group is more deserving of our 2022 MLK GEM award than the San Francisco African American Faith-Based Coalition,” said the Father Ibegbulem in presenting the award. “So many people benefit from your many services, and for your continuous efforts, we express our deep gratitude.”

According to the parish, the SFAABAC in concert with other community partners that support its mission, distributed more than 350,000 prepared meals between March 2020 when the pandemic began, to November 2021. It fed some 5,000 households in 2020 and 2021. The coalition continues to organize distribution of vaccines, COVID-19 testing, and provide Zoom workshops related to health.

Accepting the award on behalf of the coalition was Sister Gladys Livé from New Providence Baptist Church, chief operating officer for the coalition, and St. Paul of the Shipwreck parishioner Guillermo Reece, lead liaison for the coalition.