Catholic culture and America in film 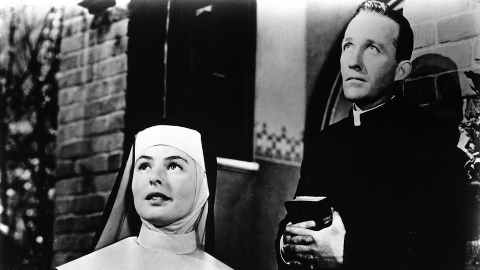 Though it may seem like a distant memory today, there was once a time when the Catholic Church was as much a part of American culture as baseball. While it certainly still maintains a prevalent presence in American culture today, many long for the times when the Church was a fearless advocate for all that is true, good and beautiful among the American people.

Of course, a good gauge of any institution’s influence on culture is the ways in which it’s depicted in the art produced by the culture, and for the better part of 100 years, film has arguably been the dominant art form and the standard by which cultural trends are measured. The Church hardly has a presence in modern films, and if it does, it is oftentimes a caricature of what the Church actually is and what it stands for.

However, looking back over the last 75 years or so, there have been many great films that not only represent the Catholic Church, or at the very least Catholic themes, fairly and truthfully, they also reflect the critical role the Church has played in shaping American culture. These films are worth another watch, as they hearken back to times when the Church had a more respected presence in American society and offer glimpses of how the Church can reclaim its status as a moral authority in a world that’s all but lost its way.

One such film is “The Bells of St. Mary’s” (1945), starring Bing Crosby and Ingrid Bergman. Crosby reprises the role of Father O’Malley, which he played the year prior in “Going My Way”, and Bergman plays Sister Benedict, a stark contrast from her role as Ilsa Lund in Casablanca, for which she’s best known.

The film tells the story of a Catholic school that’s in dire straits and on the verge of closing. Father O’Malley is assigned to the school and is asked to gauge whether or not the school is beyond saving. He and Sister Benedict have differing opinions about how to save the school, but through their working relationship, they are ultimately able to save it by setting aside their differences to work toward the greater good, a lesson that many in the American Church could benefit from today.

Most endearing of all is the sincerity with which each portrays their religious vocation; Father O’Malley is a gentle-hearted priest who is trying to do the right thing, while Sister Benedict is a stubborn nun who doesn’t want to see her school condemned. The film recalls a simpler and more innocent era in American culture and showcases the invaluable presence that parochial schools once had in America.

While Father O’Malley is what you might call a charming priest, some parts of America have required priests to be much grittier. “On the Waterfront” (1954) features one such priest, Father Barry, who is masterfully portrayed by Karl Malden; and that’s saying something, considering his costar is the great Marlon Brando. Brando plays Terry Malloy, a former prizefighter who finds himself at the middle of a drama involving his fellow dockworkers and a corrupt union boss, Johnny Friendly. Despite Friendly’s dirty tactics, Malloy is conflicted about whether he should stand up to him or just keep his mouth shut and go about his business. Friendly gives Malloy an easy job compared to the dockworkers for his compliance.

The two voices of morality for Malloy are his love interest Edie and Father Barry, who is rather fearless in standing up to the mob. In one particularly poignant scene, Father Barry delivers an impassioned speech reminding the dockworkers that Christ walks among them, and that every time a worker is murdered, it’s a crucifixion. Not only is Father Barry’s exhortation one of the most underrated and deeply Catholic monologues in all of film history, it speaks to the deeper truths of the duties and calling of a priest, especially in a culture that runs rampant with sin and corruption.

Another more recent film that features a priest as the voice of morality amid an American backdrop is Clint Eastwood’s “Gran Torino” (2008). Though it’s best known for Eastwood’s now famous “Get off my lawn” line, the film itself is an unassuming look at the role of faith in the lives of ordinary people and how it shapes the decisions we make. Eastwood is great as the stingy and senile Walt Kowalski, and as the film plays out, the analogies to Christ become more and more evident.

Kowalski is a recent widower, having lost his wife of 50 years, and is a less than exemplary father to his grown children. He lives in a rundown Detroit neighborhood plagued by gang violence, and his prized 1972 Ford Torino becomes the target of a local gang. His wife was a devout Catholic, and before she died, she told their priest, Father Janovich, that she wanted him to hear Walt’s confession. Walt, a hardened Korean War veteran, has no interest in doing so and shows no respect to the priest.

Even so, Father Janovich persists throughout the film and continues to be a voice of reason when Walt finds himself entwined in a bout of gang violence involving his Hmong neighbors. While Father Janovich’s role is understated throughout the film, one could argue that it is the priest’s presence in Walt’s life following his wife’s death that ultimately shapes how he lives the rest of his days – and even what he does with his Gran Torino.

Still other films, both new and old, are perhaps not as dramatic in their depiction of Catholicism in America (though admittedly, it is pretty cool to see priests carrying themselves like Father Barry in “On the Waterfront”), but they still illustrate the lasting impact the Catholic Church has had on American culture over the years.

“Lilies of the Field” (1963), for instance, is notable in that it earned Black actor Sidney Poitier not only his first Academy Award, but also made him the first person of color to win best actor. He stars in this heartwarming tale about Homer Smith, an itinerant worker who helps an order of poor German nuns build a chapel in Arizona. Again, this film underscores the important role that both Catholic immigrants and African Americans played in building American culture, but more than that, it is yet another shining example of the true nature of Catholic Christian morality, namely, the great command of serving one’s neighbors.

Even for those who may have been raised Catholic but no longer practice their faith, there is grace that comes with having that sense of faith instilled at a young age. The film “Lady Bird”(2017) is a perfect example of this. This coming-of-age story starring Saoirse Ronan is a beautiful and real depiction of how faith can keep a person grounded as they’re trying to discover who they are. Ronan plays Christine “Lady Bird” MacPherson, a senior at a Catholic high school on the verge of beginning her life. A strained relationship with her mother and the challenges that come with being a teenager lead Lady Bird into trouble. While not an explicitly Catholic film (and one that’s not for kids), it nonetheless is a moving story about keeping faith amid the messiness of life.

The reality is that America would not be the country it is without the presence of the Catholic Church, and it is the Church’s continued presence, however unappreciated or unnoticed by the American people, that keeps our great nation grounded. The beauty of America lies in its diversity and the coming together of many different cultures, and the stories told in these films and others prove that Catholics are just as essential a piece of America as those others that have built this great nation into what it is today.

Aaron Lambert is a writer from Denver.