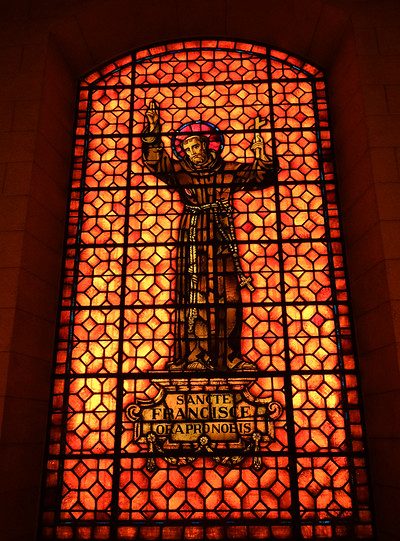 St. Francis holds a special place in the heart of the city of San Francisco and Mission Dolores. A stained glass window adorns the entrance to Mission Dolores Basilica and reminds visitors of the importance of this saint whose feast day is Oct. 4.

Mission San Francisco de Asís, more commonly known as Mission Dolores, was founded on October 9, 1776. The mission was named after St. Francis, founder of the Franciscan Order, and also after Our Lady of Sorrows, taken from the name of a nearby lake, Laguna de Nuestra Señora de los Dolores.

“Beyond its age, it has great symbolic significance,” commented Andrew Galvan, Mission Dolores Museum curator. “Its Franciscan founders were motivated by the example of St. Francis to bring the message of God’s love and salvation to the peoples of the ‘so-called’ New World. The spirit of generosity and tolerance that marks San Francisco today can be traced in no small part to the ideals of St. Francis imparted by the Mission founders.”

The new Basilica of Mission Dolores was built in 1876. Unfortunately, like most structures built before 1900, the building was greatly damaged in the 1906 earthquake because it was not reinforced. It was deemed irreparable.

After the earthquake, Mission Dolores was included in the reconstruction of the archdiocese. New plans were set and the cornerstone was placed in 1913. Between 1913 and 1918, the church was under construction, with a short pause between 1916 and 1917 due to World War I. The church was dedicated on Dec. 24, 1918. Mission Dolores was consecrated in 1936 and formally declared a Minor Basilica in 1952 by Pope Pius XII.

Many of the stained glass windows in the Basilica come from Munich, Germany. During the time of Archbishop Patrick Riordan and just after, the archdiocese procured a large amount of stained-glass windows from German artists Franz Mayer and Franz Xaver Zettler. The artistry of creating high quality stained glass and the beauty of the scenes themselves drew Archbishop Riordan to include the windows in new churches being built within the archdiocese.

The placement of the stained-glass window of St. Francis is important for two reasons. The first is because it honors the patron saint of the mission and the founder of the Franciscan order, to which St. Junipero Serra and his fellow missionaries belonged. Secondly, it is situated directly across from the altar and Blessed Sacrament. This is significant because St. Francis had a deep devotion to Jesus in the Eucharist.

“St. Francis’ love and devotion to the Eucharist sprung from his zeal for the Gospel and total dependence on God’s grace,” says Father Francis Garbo, pastor of Mission Dolores. “In following in St. Francis’ example, we too are called to live in awe and wonder of the Eucharist, giving thanks for this wonderful sacrament.”

The St. Francis window is just one of many in the Basilica to meditate upon. For generations, the stained glass windows of Mission Dolores Basilica have illuminated the hearts and minds of visiting faithful, directing them toward the wonder of the eternal God.