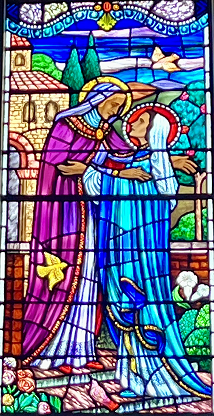 In October and November, the Church reflects on the gift of the rosary and the glory to come for those who remain faithful to Christ and close to Him through the grace of the sacraments.

Walking through the life of Jesus with Mary in the rosary, one sees the foundation of the Holy Spirit’s work in the world through the Church. According to the Catechism of the Catholic Church, “Jesus’ words and actions during His hidden life and public ministry were already salvific, for they anticipated the power of His paschal mystery. The mysteries of Christ’s life are the foundations of what He would henceforth dispense in the sacraments, through the ministers of His Church, for ‘what was visible in our Savior has passed over into His mysteries’” (1115).

At St. Elizabeth Catholic Church in San Francisco, the mysteries of the rosary become interlaced with the seven sacraments. With intricately painted stained glass, the remarkably detailed windows depict the joyful, sorrowful and glorious mysteries of the rosary, as well as the sacraments – Baptism, Penance, Holy Communion, Confirmation, Holy Orders, Matrimony and Anointing of the Sick.

Established as a mission church in 1912, the current structure was built in 1960 and dedicated in 1961 by Archbishop John J. Mitty. In addition to the grand stained-glass windows on the sides of the main church, stained-glass windows of Sts. Elizabeth, Zachariah and John the Baptist grace the church entrance.

The windows were ordered from the renowned Harry Clarke Studios in Ireland. While Harry Clarke passed away in 1931, one of his apprentices, William Dowling, was in touch with then-pastor Father Arthur Cantwell to design the windows for the new parish. Dowling had just worked with St. Bridget’s in San Francisco on their stained-glass windows.

According to the research of Paul Donnelly, a letter between the two men was found with Father Cantwell noting, “The first three windows have been installed and they are of such beauty of color and design and workmanship that we are at a loss of words to express our great appreciation of them. Thank you is the most inadequate word to express so much but it is entirely heartfelt.”

No doubt parishioners and visitors alike over the past 60 years have echoed Father Cantwell’s words of gratitude for the awe-inspiring windows at St. Elizabeth’s.

Powers is the assistant director of Communications and Media Relations for the Archdiocese of San Francisco.