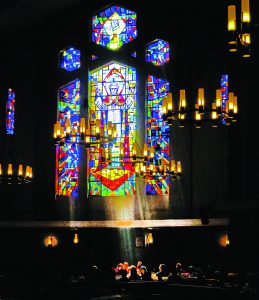 “The pages of the Gospel show clearly how special was that love for children which Christ showed while he was on earth. It was his delight to be in their midst; he was wont to lay his hands on them; he embraced them; and he blessed them.”

Pope St. Pius X wrote these words in his decree “Quam Singulari “(translated How Extraordinary) which set the age for first Communion and first penance at the “age of reason” or 7 years old. The decree restored a practice of the early church that was changed in the 13th century. Pope St. Pius X believed that children, being in a state of innocence and purity of soul should be able to receive holy Communion and absolution to strengthen and protect against the dangers and challenges of the modern world.

This important decree is memorialized in the magnificent stained-glass window of Pope St. Pius X at St. Pius Church in Redwood City.

One of three large, impressive windows in the church, the window of Pope St. Pius X was designed by G. Stephen Walsh Studios in Dublin, Ireland. Handwritten letters between George Walsh and Msgr. (then Father) Michael Fitzsimon reveal the collaborative process between California and Dublin of design, approvals, shipments and installation.

Originally the request was for one window but expanded to include three large windows for the church. This lengthened the process, but ultimately Walsh wrote, “I do not want to rush this job – I want these to be first class, so you will be pleased you got them here.”

The glass itself is from France and Germany and is hand-blown, shipped to San Francisco in parts for installation by Hogan Studios in Los Gatos. The first of the boxes were shipped on the Sumida Maru in March of 1968, with the final shipment arriving in October of 1968.

According to Father Tom Martin, pastor of St. Pius Church, “Pope Pius X instituted first holy Communion for children – the first time that was done in the history of the church. Pope John XXIII represents another dramatic change of the church with the implementation of Vatican II.”

The window is also positioned to stream morning light into the church, covering the altar, highlighting the importance of the eucharistic center of the church.

“Most especially during Mass when the natural light shines through the colors of the windows, bathing the sanctuary, I am always awed that all things are restored in Christ,” Father Martin commented.