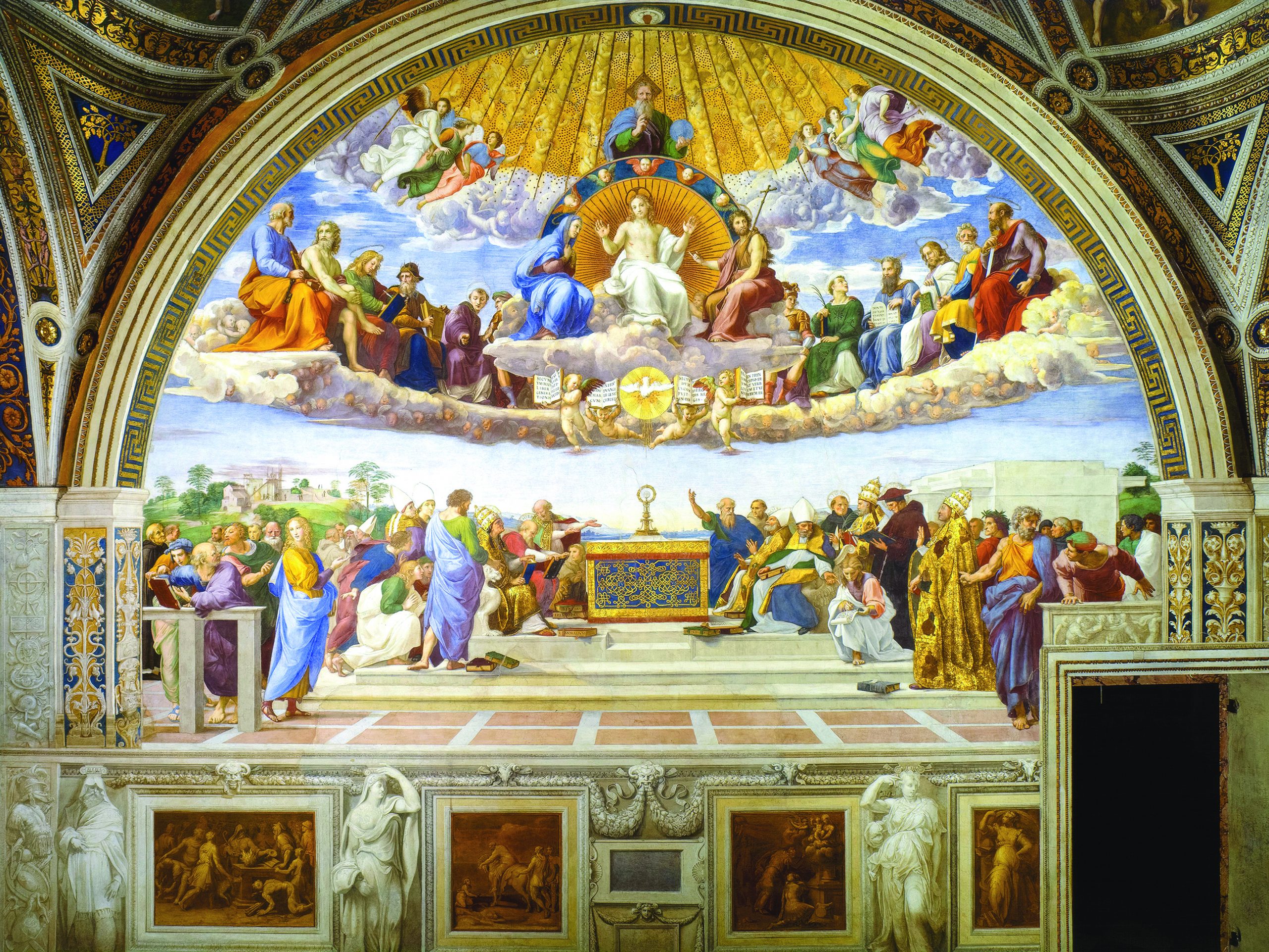 The communion of saints portrays the faithful in three distinct situations: souls on earth, souls in purgatory and souls in heaven.

The Communion of Saints

“Since we are surrounded by so great a cloud of witnesses, let us rid ourselves of every burden and sin that clings to us, and persevere in running the race that lies before us while keeping our eyes fixed on Jesus, the leader and perfecter of faith”

The merciful love of God and his saints

The communion of saints is a teaching of the Catholic faith that we profess in every recitation of the Creed at Mass. Pope St. Paul VI describes the dogma well in his 1968 “Credo of the People of God”: “We believe in the communion of all the faithful of Christ, those who are pilgrims on earth, the dead who are attaining their purification and the blessed in heaven, all together forming one church; and we believe that in this communion the merciful love of God and his saints is ever listening to our prayers.”

In Latin, the name is “communio sanctorum.” In English, “communion of saints” joins together two of the most beautiful and positive nouns in our language. This short phrase expresses a truth that is supernatural and even mystical – but it evokes a feeling that is as natural and comfortable as family and friendship and camaraderie. It tells us that we belong to a vast fellowship of souls from all the ages of faith.

This colorful spiritual panorama of personalities is a prime example of unity in diversity, gathering together all of the faithful and recognizing the three distinct but adjacent neighborhoods in which they dwell: earth, purgatory and heaven. In weighty Latinate terms, those on earth are the church militant, those in purgatory the church penitent and those in heaven the church triumphant. But the experts have a single, simple word for the essence of this teaching: solidarity.

“The communion of saints is the spiritual solidarity,” says the 1917 Catholic Encyclopedia, “which binds together the faithful on earth, the souls in purgatory, and the saints in heaven in the organic unity of the same mystical body under Christ its head, and in a constant interchange of supernatural offices.” The Second Vatican Council in 1963 in “Sacrosanctum Concilium” declared: “A supernatural solidarity reigns among men. A consequence of this is that the sin of one person harms other people just as one person’s holiness helps others. In this way Christian believers help each other reach their supernatural destiny …. This is the very ancient dogma called the communion of saints.”

Our pastors and teachers emphasize the sociability and the sharing. Pope Benedict XVI in “God Is Love” (“Deus caritas est”) says, “Union with Christ is also union with all those to whom he gives himself …; this sacramental ‘mysticism’ is social in character.” The Catholic Encyclopedia speaks of “the mutual exchange of examples, prayers, merits and satisfactions,” and stresses that “every pious and holy action done by one belongs to and is profitable to all.”

There is deep theology here. But a theological non-sophisticate like myself thinks inevitably of “support groups,” those social inventions that have aided so many people in recent years in their search for health, or peace, or wisdom or companionship. Is it irreverent to think of the communion of saints as the original support group? (World’s oldest and largest support group, our advertisement might say). This group meets not monthly, or weekly, but is continually in session. You can drop in anytime, to pray to, pray for, learn from and bask in the company of our sisters and brothers in faith from every age.

The Letter to the Hebrews, quoted above, reminds new Christians of the heroic faithful in the Bible, describing these ancestors as “a great cloud of witnesses” that “surrounds” the newly baptized. Scholars of Scripture note that in the original Greek the image is not of a cloud drifting in the sky (“nephele”) but of a cloud that fills the whole field of view on all sides (“nephos”). The new Christians are pictured in a stadium full of spectators, readying themselves – it’s a favorite Pauline metaphor – for a foot race toward salvation.

As I read this passage, the imagined arena is so crammed with supporters that the novice faithful down on the running track are, as it were, socked in by the abundance of friendly souls. The multitudinous particles that constitute this grand fog bank of benevolence are the saints who are our predecessors: “Consider the outcome of their way of life and imitate their faith,” urges the writer (Heb. 13:7).

Lessons of the COVID pandemic

This image of a dense cloud of fellow humans with whom we share a healthful communion and a salutary solidarity is pleasing, but reading it today is a bit of a shock. Since the pandemic began, we have lived in fear of crowds and clouds – those clouds of breath we all used to exchange so casually. We have had to express our communion with others by keeping away from them. We have learned to show our solidarity by masking ourselves and vaccinating ourselves. Sociability has been replaced by social distancing.

COVID-19 has done incalculable damage, and the danger continues. This disaster has certainly, however, opened our eyes to the willy-nilly intimacy of all human  relations, even across continents and oceans. We are all vulnerable, and all exposed, all potential “vectors” to one another. We have seen with stark clarity that each of us exists in multitudinous branching relationships with others whom we do not even know, and that our private or local behaviors have public and global consequences.

The teachers of the communion of saints say that in the spiritual realm there are “mutual exchanges” and a “special interconnectedness” by which “the sin of one person harms other people just as one person’s holiness helps others.” COVID-19 provides us a sharply etched physical analogy to this Christian insight: In body, as in soul, we do not live by and for ourselves.

Saints and sinners and seven centuries of poetry

The communion of saints portrays the faithful in three distinct situations: souls on earth, souls in purgatory and souls in heaven. Absent from this communion (by definition, self-excommunicated from it) are the souls in hell. But is any portrait of our spiritual universe complete without hell? The closing months of 2021 are an ideal opportunity to reacquaint ourselves with Dante Alighieri and his incomparable poetic triptych of hell (Inferno), purgatory (Purgatorio) and heaven (Paradiso) in “The Divine Comedy.”

“Dante died 700 years ago on Sept. 13, 1321, of malaria, which was the COVID of his time,” says Robert Royal, editor of The Catholic Thing website. Royal is among the many scholars, teachers and readers who are paying special attention this year to the work of the great poet. There are many lectures, webinars, book groups and panel discussions online.

And why is Dante the one to read today, all these centuries later? Royal sums it up neatly: “In his work you find a comprehensive synthesis of the biblical, classical and medieval worlds … and all presented in a brilliant poem, maybe the greatest poem ever written, culminating in what few poets would dare attempt: a presentation of the beatific vision. … And yet there’s a single golden thread that is woven into the tapestry, which unifies everything: Love, real love, the authentic and foundational love that created everything and variously manifests itself in human life, nature and supernature. ‘The love that moves the sun and other stars’ (‘L’amor che move il sole e l’altre stelle’), as he writes in the very last line of Paradiso.”

Love is the direction. It is our origin and our destination, the path we travel in the company of all the saints.

J. A. Gray is a writer and editor, and most recently served as communication manager for the Archdiocese of San Francisco.