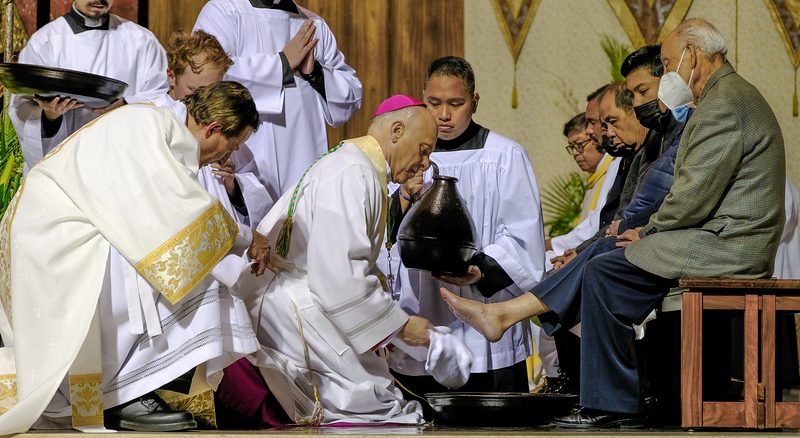 The road to becoming a deacon is a long and sometimes arduous one, and I would say especially so for this class.  Our brothers about to be ordained to the diaconate today I think can be dubbed the “Covid class.”  But with much patience and God’s grace we have arrived at this day.

A big part of that journey is being subject to scrutiny: candidates for Holy Orders are examined, evaluated and discerned in just about every way – academically, pastorally, spiritually, and in terms of their personal qualities.  By the time they arrive at ordination, candidates for Holy Orders have been bisected, dissected, and placed under an electron microscope.  But this is all for good reason, for it reflects the Church’s great solicitude for the pastoral care of her people.  A solicitude that goes back to the very beginning.

We see this reflected in St. Paul’s First Letter to Timothy, selected by our brothers for the second reading of their Ordination Mass.  We see here the Church’s concern for scrutinizing deacons, that they have the proper qualities necessary for their ministry.  Service in the Church in any kind of official capacity is not merely an external function, fulfilling the routine of the requirements of a job.  Rather, it’s to spring forth from a vibrant faith, an interior life of adhesion to our Lord Jesus Christ so as to share the great wealth that is his love with others.  That is why St. Paul says, after listing the virtues a deacon must exhibit, that he must “[hold] fast to the mystery of the faith with a clear conscience.”

In a few moments our brothers will be scrutinized one last time before their ordination, this time taking the form of their ordination promises.  And in accord with St. Paul’s exhortation, they will resolve “to hold fast to the mystery of faith with a clear conscience,” which is the basis upon which they can also resolve “to proclaim this faith in word and deed according to the Gospel and the Church’s tradition.”

As the Angelic Doctor (St. Thomas Aquinas) points out, the exhortation here is to hold fast to “the mystery of faith,” and not simply “faith,” because the man of God is to “have not only the faith, but an understanding of that which is hidden under faith … because ministers should know not only those matters about the faith which are known to the people, but also its mysteries, because they are obliged to instruct others.”  Thus the need for a pure conscience, “because an impure one makes one err in matters of faith.”[1]  It is, in a word, simply a matter of integrity.

Thus the need to attend to the interior life and one’s personal qualities and Christian virtues, for what is on the inside will come to the surface in the ordained minister’s pastoral care of the people of God.

And our Lord makes it very clear what that pastoral care is to look like: “… it shall not be so among you.  … whoever wishes to be great among you shall be your servant; whoever wishes to be first among you shall be your slave.”  The word “deacon,” of course, comes from the Greek word diaconos, meaning “servant.”  But this word is basically synonymous with the Greek word doulos, which is translated “slave.”  Notice that both words are used in this passage, interchangeably.  Our Lord makes it very clear that the one entrusted with Church authority, his authority, must exercise it with humble charity.  Yes, exercise it he must, for every society must have legitimate authority to ensure its good order.  But in the Christian context, authority is an exercise of service, not ambition or tyranny over others in order to ensure one’s power.

To hold up just one among very many examples in our Church’s history: when St. Francis Xavier embarked upon his missionary journey to India he could have been provided servants by the king himself.  But he refused, attending to the poor and sick himself, to their bodies as well as their souls.  Given the sensitivities of the time, this was seen as unworthy of one sent by the Pope’s representative to be an official Church minister.  But he responded: “There is nothing more worthy than humility and Christian charity which becomes all things to all men, so as to gain all: which Christ through his whole life continually enjoined by word and deed.”  It is said that, far from diminishing, this actually increased his authority.[2]  This is true authority, when the people of God know that the one entrusted with their pastoral care loves them, is present to them, and does all in their spiritual best interest, for their good, not his own.

My dear brothers: you are about to become collaborators in Holy Orders with your Archbishop – with me and my successors, as you will pledge in making your promise of obedience – and with the priests of our Archdiocese who share with me in the ministerial Priesthood of our Lord Jesus Christ.  You will share with us the pastoral care of the Christian faithful in our local church, making the unique contribution that the deacon does in providing this pastoral care.

Let us together embark on this service to the Church in imitation of our Lord, with the same purpose for which he came into the world, of which he reminds us in the Gospel and to which the Collect (Opening Prayer) of this Ordination Mass referred, as will the Prayer of Ordination which in a few moments I will pronounce over you: he came “not to be served but to serve.”  With the help of God’s grace, may we be worthy of such humble charity.