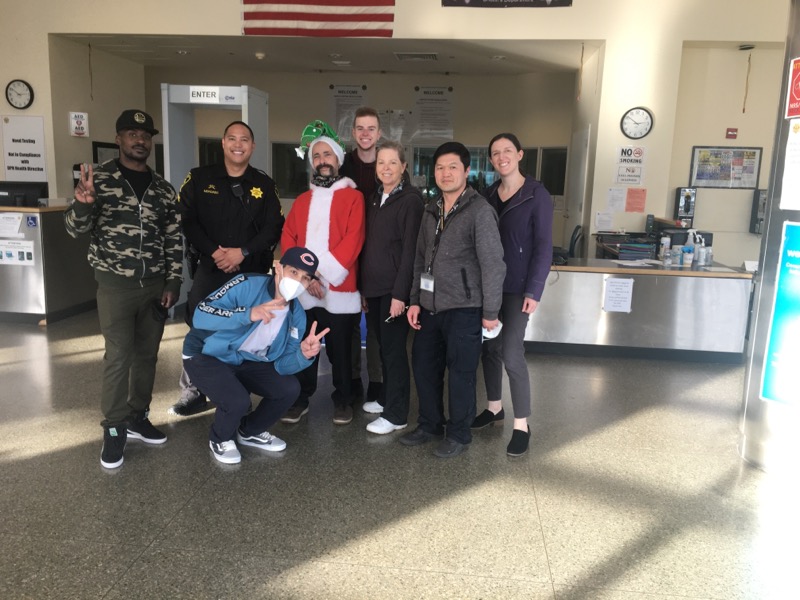 “Everybody needs a message or….uplifting words of encouragement at times. That’s what this is about for me.”

These were the words of Dwight Robinson, a volunteer with the 2022 Restorative Justice Christmas Card project.

Carrying out the annual tradition, volunteers gathered for two days to prepare hundreds of goody bags for the people in San Francisco’s jails. The project, organized by the Restorative Justice Ministry, is an effort to bring a bit of cheer into the jails at Christmastime.

Some of the volunteers who came together on December 12 and 13 had previously been involved with the work of the Restorative Justice Ministry, while others came for the first time. All said they came because they wanted to do something for others.

Maria Harris, who has worked with the Restorative Justice Ministry for the past few years, said that she was taking part in the project “because I love to help people. People are my happiness. In each person, Jesus is there.”

“Hopefully it brings the prisoners joy,” said Ellen Pendergast, who tagged along with a friend. This was her first experience with the Restorative Justice Ministry.

Accompanied by festive Christmas carols, the volunteers sorted donations of blank holiday cards that would be given to people in the jails. These cards can be used to send holiday messages to loved ones. The postage is provided through a partnership with the San Francisco Sheriff’s Department.

“I hope… they use them to reach out to someone in their family or friends’ circle, and sometimes that’s an olive branch to healing something that was broken between friends, between family,” said Connie D’Aura, a St. Stephen’s parishioner.

D’Aura has begun getting more involved with Restorative Justice projects in the past year, after seeing invitations to help in various newsletters.

“Last year, I did donate some cards….and so this year it was nice to take the next step and be part of assembling it and now delivering it,” she commented.

In addition to the blank cards, each goody bag included a bag of chips, some cookies, and a granola bar as treats for the men and women. The volunteers also took the time to write encouraging notes for each person, some in English and some in Spanish. These were added to the handmade cards sent in by the CCD students of St. Mark Parish in Belmont, who had written their own messages of support and encouragement.

“Messages of hope, peace and love through this activity are not just for the people in custody in the jails, but for all of us,” said Julio Escobar, restorative justice coordinator, “to remind us that hope, peace and love begin with each of us, whether we are in or out of jail.”

The volunteer group also received a visit by Archbishop Salvatore J. Cordileone during the project. He stopped by to see how the project was going and to thank those gathered for their work.

After hours of effort by this dedicated crew, roughly 800 goody bags were assembled. Some of the volunteers joined in two days later to deliver them to the people in the jails at the Hall of Justice in San Francisco and to the county jail in San Bruno.

For Anthony D’Aura, Connie’s son, this was his second experience going into the jails. He had helped to deliver Thanksgiving meals in November with the Restorative Ministry team.  “I was definitely concerned about how the inmates would react to seeing me,” he reflected on that experience, “but then when I started serving them they were all really nice and really grateful to receive the food. So that was really heartwarming.”

He hopes to continue this work now that he knows more about it. “I think it really helps to repair the image of the incarcerated….in the eye of the general public,” said D’Aura, a recent UC Berkeley graduate.

Yolanda Robinson, religious services coordinator for the San Francisco Sheriff’s Department, thanked the volunteers for making the project a success. She and her team planned to pick up any cards for mailing a few days later so that the holiday greetings would be sent to loved ones.

Connie D’Aura reflected on the value of the cards’ project for her, saying, “Each person is a gift from God, and has that dignity to respect and nurture.”

For her part, Harris hoped that through the project, “all the inmates will lift up his or her eyes to God, because we’re all God’s creation, and we need to live in peace and love and harmony, without violence with anyone.”

Although she wasn’t able to go to the jails to deliver the cards, she affirmed that her work wasn’t finished. “I will pray for each person who will receive those bags.”