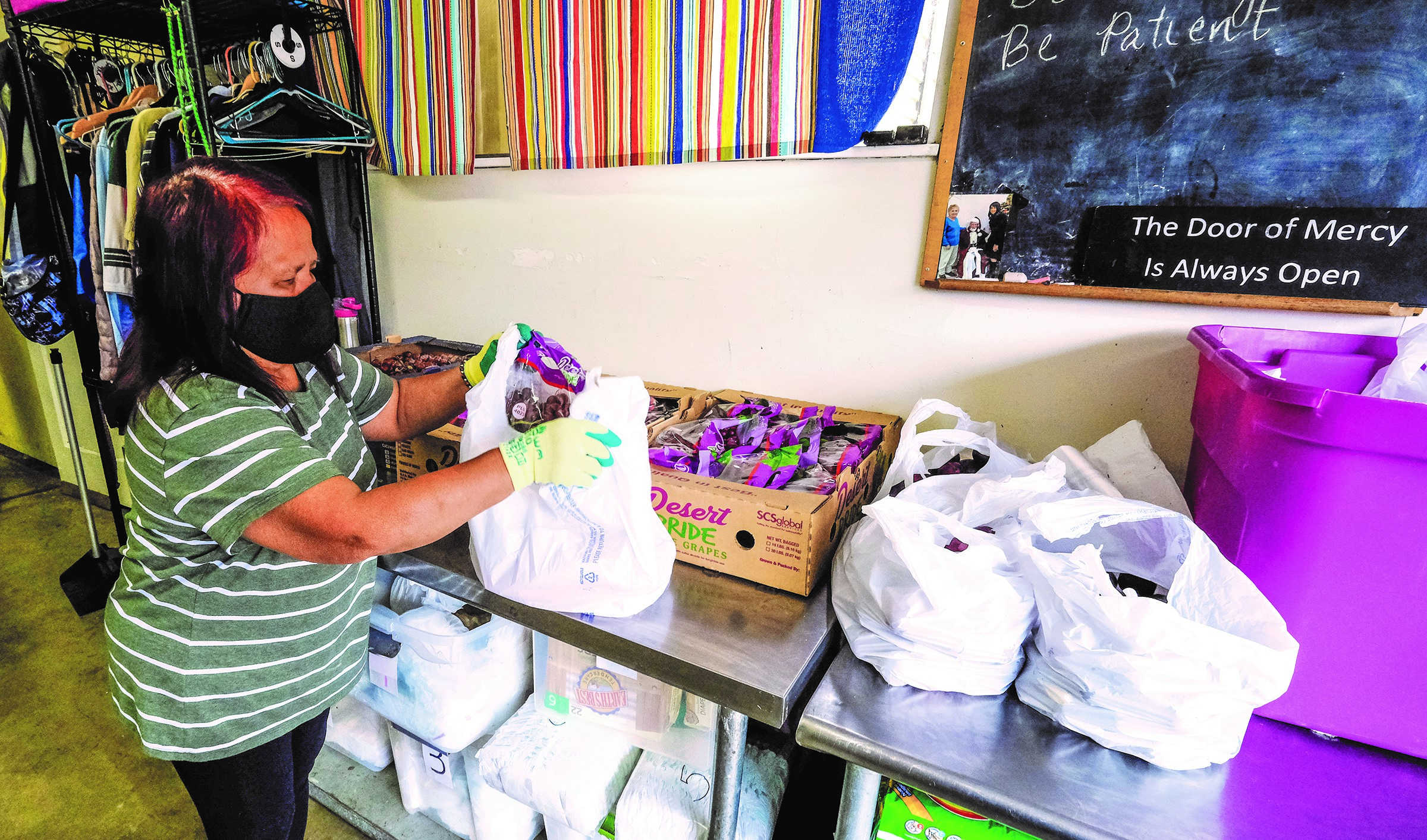 Christina Gray is the lead writer for Catholic San Francisco

“No need is foreign to us,” said Marc Bruno hours after canvassing the streets of San Francisco’s North Beach neighborhood on a sweltering summer Sunday, handing out thick sandwiches from a local Italian deli to “anyone who is homeless or appears homeless.”

The sandwiches are bagged with socks, underwear, a face mask and hand sanitizer.

Bruno, an Emmy-award-winning theater and television producer, is a longtime parishioner of Sts. Peter and Paul Parish in San Francisco and a nearly 30-year member of the parish’s St. Vincent de Paul conference, which dates back to the 1930s.

Back then, the parish conference had a fund to pay for school lunches for children of poor families, jackets for those who needed one and, according to parish records, an antiquated-sounding “hobo fund.”

“Now, the reality is, for better or worse, that our work is associated with the homeless,” said Bruno. That includes staving off homelessness and hunger in the poor living often unseen in the tourist enclaves of North Beach and nearby Chinatown.

He considered the priesthood decades ago while living with a monastic community in rural France, but today Bruno is the unofficial leader of the parish conference which numbers about 20 members. Sixteen of those members have continued the “meals and masks” patrol throughout the COVID-19 pandemic, said Bruno.

The scope of help offered by the parish conference is vast, he said, going beyond food and basic necessities. Conference members are the “eyes and ears of the neighborhood,” working in informal partnership with local police, business owners and residents to solve community problems.

“Anyone can do this,” he said. “We have in our own hands and in our own hearts the ability to become closer to God whenever we wish, simply by helping those in need.”

The term “conference” originated with the founder of the Society of St. Vincent de Paul, Antoine Frédéric Ozanam, a French university student in 19th-century Paris. Conferences are groups of volunteers who seek to grow and develop their spirituality through friendship and person-to-person service.

Inspired by the French saint’s commitment to the poor, Ozanam helped organize the first conference in the saint’s name in 1833. His goal was to create a network to help those in need.

Today, the St. Vincent de Paul Society and its conferences are active in 142 countries. According to the national website, nearly 100,000 volunteers in nearly 5,000 conferences across the United States serve their communities as “Vincentians.”

The structure of the St. Vincent de Paul Society in San Francisco was changed forever after the Great Earthquake of 1906. That is when Catholic parishes were dispatched by the church to help the society “take up with renewed vigor” its work in “succoring the work of the poor, the sick and the aged.”

Archbishop Patrick W. Riordan presented a new vision for the local St. Vincent de Paul Society 16 months after the earthquake and fire left up to 300,000 people homeless, including many of its own staff and volunteers. An unknown number of children were orphaned.

Archbishop Riordan announced that a support system would be formed by “branching out into all parishes of the church.” A central bureau would coordinate the work of each parish conference.

The parish conference was a pastoral solution to an overwhelming crisis of human need that helped reshape the local society.

Our Lady of the Pillar Parish in Half Moon Bay is one of 32 parish-based conferences in the St. Vincent de Paul Society of San Mateo County. Over 1,000 Vincentian volunteers serve the diverse county according to its website (svdpsm.org).

Many locals are poor migrant families who work the green fields around the parish, or in the many restaurants and hotels serving tourists. Those impacted by pandemic-related job losses and business closures wait patiently in line for food supplies and other assistance.

“This is how we express our Christian love,” said parishioner Nancy Clarkin, a 20-year volunteer with the parish conference, who works alongside her husband, Tom, in the parish pantry. The refrigerated food pantry operates from the rectory garage. Two more pantries supply food and other necessities at the parish’s mission churches, St. Anthony in Pescadero and Our Lady of the Refuge in La Honda.

Food isn’t the only way the parish conference helps. Len Carlson, a longtime pantry volunteer, remembers a local schoolteacher who lost her job and was living in her car with three young kids.

“We were able to get her a hotel room for a night,” she said, before referring her to the administrative offices in San Mateo for more resources.

The parish takes up a collection every fifth Sunday to fund the pantry and other emergency needs.

“They come here with such joy and eagerness to help the people,” said Father Jose Corral, pastor of Our Lady of the Pillar, of conference volunteers. He sees “great respect, great kindness, great love.”

“You can be housed here and still be poor,” said Meredith Parnell, who works with 11 parish conferences in Marin County as director of volunteer and conference services for the St. Vincent de Paul Society of Marin County. “The conferences do a tremendous amount to keep people housed.”

The working poor are in a precarious situation in a county known for its wealth, said Parnell. Marin has approximately 23,000 individuals living below the federal poverty level and 57,000 people living below the economic “self-sufficiency” standard set by the county.

When a person calls the Marin office seeking aid, Parnell can often refer them to a specific parish conference, such as the one at St. Rita Parish in Fairfax, co-chaired by 82-year-old Jack Hayes.

When COVID-19 hit in 2020, causing widespread job loss or reduced income, Hayes stepped in to help almost 50 families secure more than $85,000 in local and county rental assistance, according to pastor Father Kenneth Weare.

Hayes insists on visiting the homes of families the conference serves so he can just “sit and listen to them.” He said the visits also help him see if families “might have other needs that I can help with.”

“The St. Vincent de Paul Society parish conferences make a tremendous difference in the lives of the people in this county,” said Parnell.