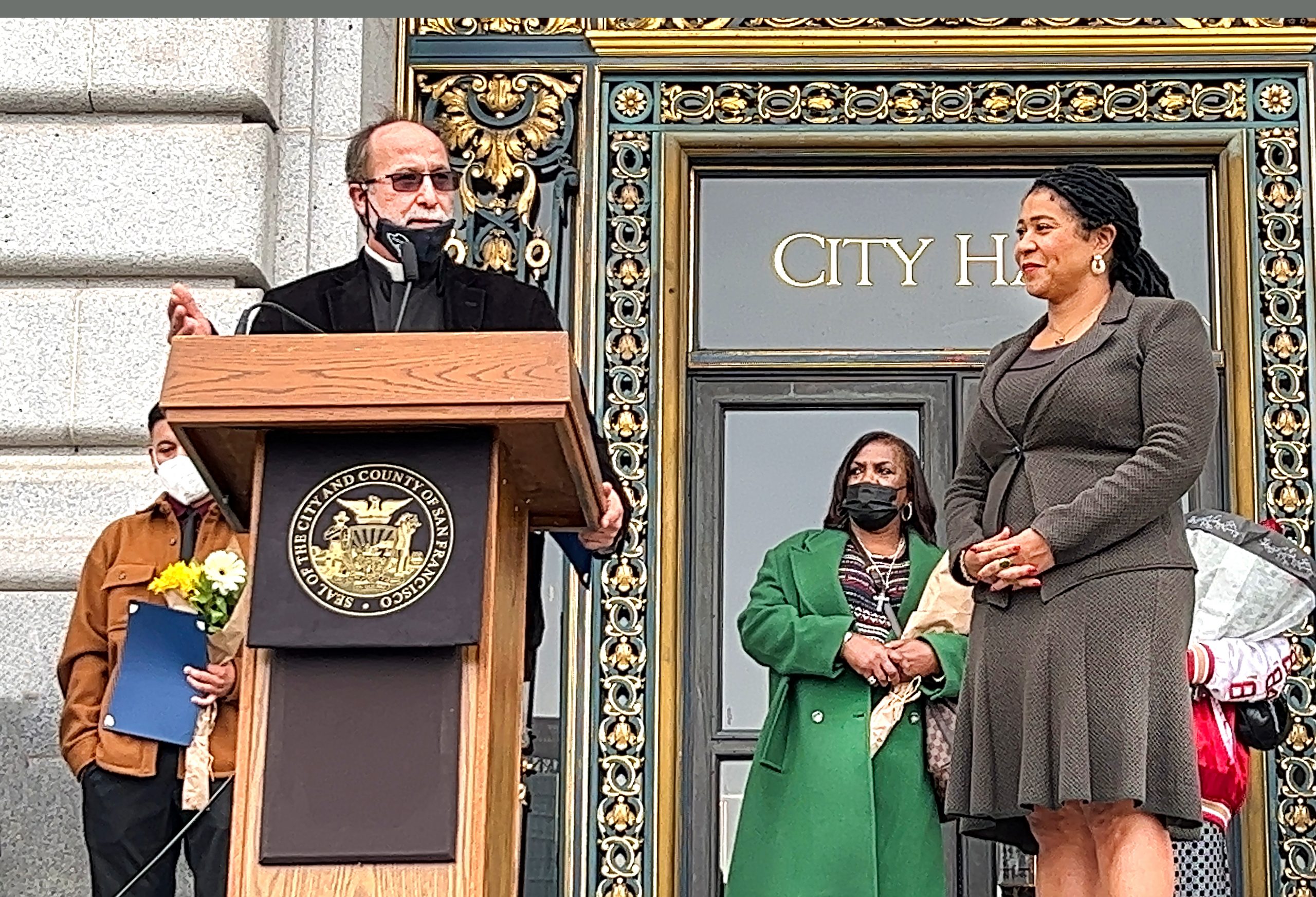 Father Moises Agudo was recognized by San Francisco Mayor London Breed as one of nine “unsung heroes” in the city’s successful COVID-19 response, all serving populations in underserved areas of the city.

“These people represent the heartbeat of the city,” Breed said in a ceremony on the steps of City Hall Nov. 15. “I could not have done it without them,” she said, adding that with their help, San Francisco has one of the lowest COVID-19 death rates per capita in the country.

Father Agudo was praised by city officials for his leadership in organizing weekend vaccine clinics at his churches, participating in a social media campaign and educational video for the Hispanic community supporting the vaccine, his advocacy for adherence to public health orders, and for making online Masses available to his community when public gatherings were restricted.

Father Agudo was humble and humorous in his public remarks at receiving the award, promising a short acceptance speech. “When I prepare something, it is usually about three hours, four hours,” he said.

The past 18 months have proven that religious leaders and the city “can work together for the benefit of the people,” Father Agudo said.

Not mentioned at the ceremony was Father Agudo’s partnership last year with Archbishop Salvatore J. Cordileone in the Free the Mass campaign to open churches that the city and state ordered closed for months. Father Agudo offered in-person Masses outdoors and led hundreds of the Mission parishioners across the city in a procession with Archbishop Salvatore J. Cordileone to St. Mary’s Cathedral for an outdoor rosary rally in October 2020.

The mayor said the nine awardees represent areas of the city that “are not always at the forefront of receiving resources that this city has available,” such as Bayview-Hunter’s Point, Chinatown, the Western Addition, the Mission District, and the OMI (Ocean View, Merced Heights, Ingleside and Ingleside Terraces) sections.

Father Agudo and his pastoral staff and volunteers helped control the rate of COVID-19 infections in the Mission District, said Dr. Grant Colfax, director of the San Francisco Department of Public Health.

“Because of your work, because of our community-based, equity-based approach, we have kept hospitalizations and death rates low, we have reopened the city, our schools, and resumed so many of the activities that make us feel whole again,” Dr Colfax said.

Father Agudo told Catholic San Francisco that he and the city are on “the same page but with a different approach.”

A turning point in his relations with the city came when it agreed to let the pastor work “in our own way” with the parish communities, who were fearful and suspicious of the vaccine and any governmental push for it, Father Agudo said.

“Let me do it,” he told them. “They will not believe you, but they will believe the priests.”

“You can see that we are responsible,” he said of his parish communities. “What we cannot do is close the church.”