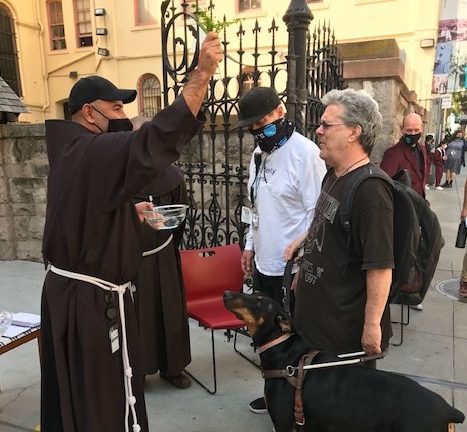 The city’s Tenderloin neighborhood was alive with the spirit and memory of St. Francis of Assisi today on his Oct. 4 feast day with the annual Blessing of the Animals at St. Boniface Church.

Three Franciscan friars, Brother Jimmy Kernan, OFM, Brother Martín Sanabria, OFM, and BrotherJuan Guerrero OFM, stood at the gated entry to the church on Golden Gate Avenue with a bowl of holy water and green branches for the blessing. Two large dog bowls on the sidewalk flanked each side of the church’s iron gates.

At St. Boniface, located in one of the poorest sections of the city, pet owners – mostly of dogs – strode up purposely to the friars to have their faithful companions blessed. Several asked for a blessing for themselves afterward.

A large service dog named Titan confused the aspergillum for an incoming treat but sat obediently for his sprinkling for his owner. A shepherd-mix puppy dozed on and off during its blessing, oblivious to the oohs and ahhs of passersby.  Tonia Zeppari, drove all the way down from Sonoma County so the brothers could bless her argyle-clad bulldog-mix named Napoleon.

She said her family deeply appreciates the saint’s love and respect for all animals. There are many stories about St. Francis love of animals, from preaching to the birds to his story about taming the wolf of Gubbio who was terrorizing the town.

“We have had animals our whole lives and really do see them as part of our family,” said the parishioner of St. Sebastian Parish in Sebastopol.

It would be easy to miss that the statue on the blessing table in front of St. Boniface was not, in fact, St. Francis, but St. Anthony. The Blessing of the Animals was part of a full day of anniversary activities for the St. Anthony Foundation, located directly across the street.

As part of the 71st anniversary celebration, a new statue of St. Anthony was blessed for placement next to a statue of St. Francis in the St. Anthony dining room. Clients who came for a meal sat outside in the closed block of Golden Gate Avenue between Leavenworth and Jones Streets to enjoy music while students of nearby De Marillac Academy joined in the festive afternoon.